Thank you Julia Hurd (Subud Bellingham/Skagit Valley (WA)) for the heads-up on Patricia Arquette being interviewed on NPR and talking about Subud! What do you think of how she represented Subud? Do you think the interviewer did more than two minutes searching Subud? Any other comments? 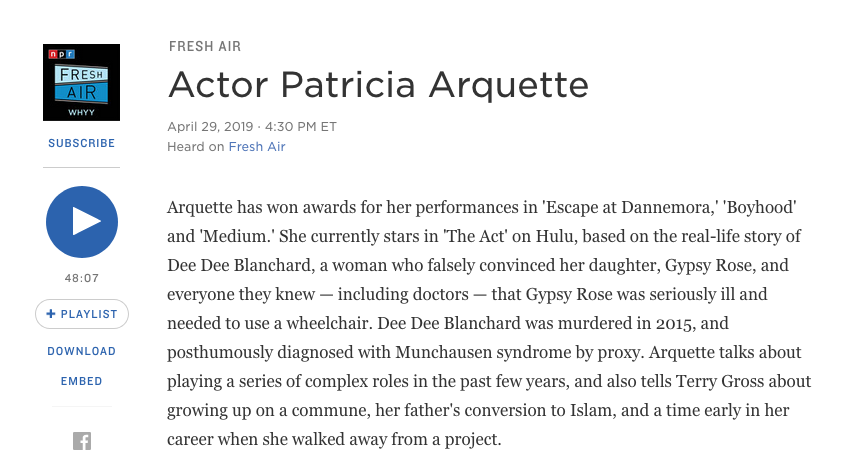 Here is the salient excerpt, transcribed:

Terry Gross: Were you raised with an understanding of social justice? Was that an important thing for your parents?

Patricia Arquette: Yes, my mom was a civil rights activist and an antiwar activist and my dad was also very political and we grew up, I remember, going to Diablo Canyon when they were going to built a nuclear power plant on a fault line in California and going with my dad to union protests and being on picket lines and helping my mom watching her organize things for the boat people who were needing help. So yeah, we grew up in a household like that. They always were talking about politics and the news was always on and there were a lot of lively conversations about all of that.

Terry Gross: You spent part of your childhood living on a commune with your parents and this was a kind of spiritual community if I understand correctly, these were followers of or practitioners of… I’m not sure what word to use, of Subud and it’s a spiritual practice that was created in the ’20s in Indonesia. I tried to go online and learn about it. I found it just a little vague and confusing because there isn’t a specific practice associated with it, so could you explain it a little bit?

Patricia Arquette: Well, really it’s nondenominational and there is actually a spiritual practice. I don’t know how to explain it other than it’s sort of like meditation but with spontaneous movement, but it’s really about kind of awakening this part of yourself so that you can have a direct connection to God and be connected to God even in the chaos of the world.

Terry Gross: And were you raised to practice that?

Patricia Arquette: When I was little my parents were practicing that. We weren’t told we had to practice anything and actually my mom was Jewish and my dad was Muslim and I went to Catholic school and I wanted to be a nun and at one point my brother was Buddhist. So my parents believed there was only one God and that really we all had the right as people to decide spiritually what our own paths were, but I do think that they derived a lot from their spiritual exercise and from being a part of Subud and I do feel that it really grounded me and made me feel very close to God, like I loved God and God loved me and I had a relationship with God. I still feel that.

Terry Gross: How old were you when you moved there?

Patricia Arquette: That’s a good question. I think four. We didn’t live there that long. We lived there for a few years, but it was a very pivotal time in my life and growing up in the country, in the wildness of the woods, playing outside and running around the base of the Appalachian Mountains and seeing poverty and the South and racism, it was really an intense way to grow up and also on another hand very, very beautiful.
Terry Gross: You mentioned your father was Muslim and he converted from Catholicism. Did he covert because of Subud?

Patricia Arquette: He actually converted from Christianity. No, I mean it’s ridiculous. This story is crazy. My dad and my mom their bond was really their spirituality and their politics and their minds, but at one point my dad said, “You know what? I’m going to convert to Judaism,” and she said, “Oh, that’s great.” So he went to go convert and he got lost and he came home and he said, “Hey, I have something to tell you. I converted to Islam today,” and she said, “Only you, you’ve got to be kidding me. Only you got lost and ended up in a mosque and converted to Islam. Okay.”
Terry Gross: Did you ever talk to him about that, about what happened at the mosque that made him change his mind.

Patricia Arquette: I did a little bit. He said, “You know I got lost and I ended up at this mosque and I went in to ask for directions. I ended up talking to the Imam and then we got into a really deep conversation about religion and it really felt right and so that’s what i did.” We were raised to really respect all religions and all peaceful people and people that loved God and even people that don’t love God. We were raised to have a lot of tolerance for religious differences.